Safety and transparence cooperation: what Poroshenko Duda spoke in the United States 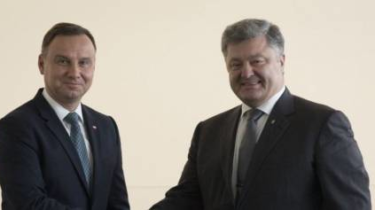 The interlocutors discussed the issues of security, further development of the political dialogue and cooperation in the field of energy and transparenciese cooperation. Participants discussed issues of strengthening cooperation between the defense ministries of the two countries, in particular in the context of the Russian-Belarusian exercises “West -2017”.

In the US, Poroshenko offered the military Academy to find a partner in Ukraine

The President thanked Poland for its support on the introduction of a visa-free regime between Ukraine and the European Union. President Duda noted that Poland consistently supports Ukraine on the path to EU membership. Talked to the presidents of the Minsk agreements, as well as on developments in the Donbas and the state of human rights in the occupied Crimea.

Video settings Poland will carry all the Soviet monuments

The presidents discussed the issue of the introduction of the UN peacekeeping mission in the occupied part of Donbass. At the end of the meeting, the sides discussed organization of the visit to Ukraine of the President of Duda in 2017.

Recall that the international community must reject the attempts to impose a policy of force and aggression in international relations, and to give it a decisive rebuff. About this informed the head of Poland Andrzej Duda during a speech at the 71st session of the UN General Assembly.