Poroshenko and Tusk discussed the situation in the Donbass, de-occupation of Crimea and peacekeepers 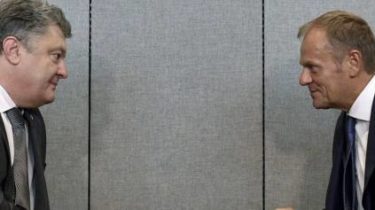 The meeting was held on Tuesday, September 19, during a working visit of the Ukrainian President in the United States.

Poroshenko and Tusk discussed the situation in the Donbas and coordinated positions on the Ukraine’s initiative for the deployment of UN peacekeepers in the zone of the ATO.

Separate attention was paid to the issue of de-occupation of Crimea. They also discussed preparations for the Summit of “Eastern partnership” which will take place in Brussels in November.