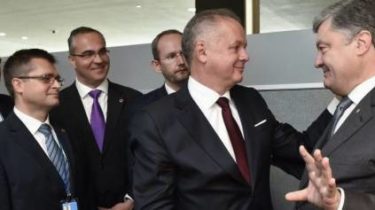 Slovakia was sympathetic to the law on education in Ukraineadopted by the Verkhovna Rada.

About it reports a press-service of the President of Ukraine Petro Poroshenko on the results of his meeting with President of Slovakia Andrej Kiska.

“The Slovak side were sympathetic to the arguments of the President of Ukraine on voted by Parliament of the law on education”, – stated in the message.

In addition, Poroshenko and Pussy discussed cooperation towards European integration and in the framework of international organizations. Also the leaders of Ukraine and Slovakia coordinated their positions in the issue of de-occupation of Crimea and Donbass UN peacekeeping mission.