UN Poroshenko showed evidence of Russian aggression in the Donbas 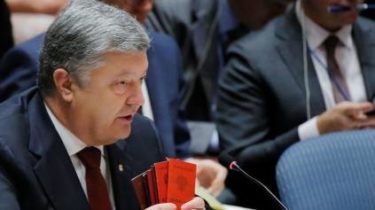 He stated this during a meeting of the UN security Council.

“Russian words that “we are not here,” have nothing to do with the truth. Russian aggression has cost Ukraine 10 thousand people were killed, 25 wounded and thousands of 8.1 million people became refugees.” Poroshenko also demonstrated and showed evidence of Russian presence in the area of ATO documents with red covers – military IDs of the Russian invaders.

The Ukrainian head of state noted that the Ukrainians may be killed, because I go to the wrong Church, or speak not in the language. Like, if this tragedy does not require peacekeepers, which then requires.

The President of Ukraine stressed that it is necessary to stop the supply of soldiers and weapons from Russia.