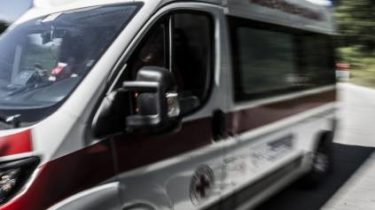 In Kiev on the street of Metropolitan Vasyl lypkivskyi, a woman fell under the wheels of trains “Ukrposhta”.

About it dtp.kiev.ua reports on his page in Facebook.

“A terrible accident in Kiev: Ukrposhta truck crushed to death a woman. Without the lower body lived for another 20 minutes… In the minds of….” – stated in the message.

According to eyewitnesses, the train several times moved the woman and dragged her on the asphalt, the victim tried to get up after a collision, but later died from severe injuries in the ambulance.

It is also noted that the woman was crossing the road at the pedestrian crossing.

Now there are law enforcement officers who establish all the circumstances of the tragedy.

Video 18+! Today, around 10:00, outside of Metropolitan Vasyl lypkivskyi (pace), an elderly woman fell under the wheels of the truck UkrPost. Unfortunately, the woman suffered very serious injuries. Information about the current condition of the victim is not. Works investigative group of the accident. Video: Anderself

We will remind, the day before, September 20, in the capital, the tram ran over a woman with a child. The child died immediately, the woman died in intensive care.