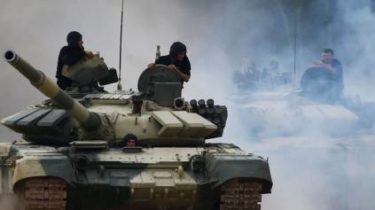 The drone of OSCE fixed 48 tanks of fighters at a distance of 57 kilometers from the occupied Donetsk.

This is stated in the report of Special monitoring mission of the OSCE on the events in the Donbass as of September 19.

In addition, on September 14 it was noticed 19 tanks and anti-aircraft missile complex tor 9К330) near Simanovci occupied “LC”.

We will remind, the Chairman of the security Service of Ukraine Vasyl Hrytsak said that more than thirty-six thousand of terrorists and Russian soldiers fighting in the Donbas.