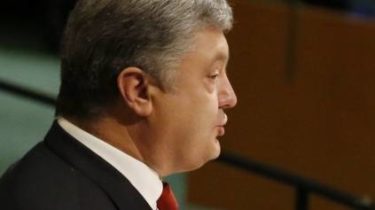 President of Ukraine Petro Poroshenko appealed to the UN General Assembly calling to recognize the Holodomor in Ukraine of 1932-33 as genocide of the Ukrainian people.

About it during a speech from the rostrum of the UN General Assembly.

“The 72nd session of the General Assembly coincides with the 85th anniversary of one of the deadliest crimes of the twentieth century – the Holodomor. It was an artificial famine in Ukraine in 1932-1933, organized by the totalitarian regime of Stalin, which led to the deaths of 7 to 10 million Ukrainians”, – said Poroshenko.

Scarred. As the famine shaped the modern Ukraine and Russia

Poroshenko remembered the words of Dr. Rafal Lemkin, the author of the Convention on the prevention and punishment of the crime of genocide, adopted by the UN General Assembly in 1948, which called the destruction of the Ukrainian nation as a “classic example of genocide”.

“I urge member States of the UN to adopt its own historic decision on the recognition of Holodomor as act of genocide”, – said the President of Ukraine.

We will remind that earlier the Senate of the U.S. state of Washington adopted a resolution honoring the memory of victims of Holodomor in Ukraine of 1932-1933.

“The Holodomor was a genocide by Joseph Stalin and the Soviet regime against the Ukrainian people”, – is spoken in the resolution.