Poroshenko urged the UN to investigate, one of the countries to help North Korea with missiles 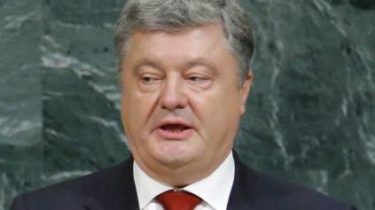 The President of Ukraine Petro Poroshenko urged the countries-members of the UN security Council to investigate, gets the DPRK regime any assistance from other countries in the sphere of missile and nuclear programs.

He said this during a speech from the rostrum of the UN General Assembly.

“Let me reiterate the call of the UN Security Council to conduct a detailed investigation into the development of nuclear and missile programs of North Korea with the aim of identifying any possible external aid to Pyongyang in this sphere”, – said Poroshenko.

According to him, Ukraine strictly condemns the nuclear test and numerous auski ballistic missiles by the DPRK.

“We are deeply concerned with the permanent withdrawal of resources, the priority of human needs, to fuel the nuclear Arsenal of Pyongyang, combined with serious violations of human rights”, – said the President.

“Ukraine strongly supports the strengthening of measures aimed at curbing the illicit activities of Pyongyang and the return of North Korea to the international legal field”, – concluded the head of state.

On 12 September the security Council of the world organization unanimously adopted a resolution imposing new sanctions against Pyongyang. So, there will be restrictions on the supply to DPRK of petroleum products. Is also the limit on the supply to North Korea of crude oil — the volumes should not exceed the figures for the past 12 months. Also, the DPRK will not be able to purchase condensate and gas liquids will not be able to sell textile products.

Recall, 3 September it became known that the DPRK had conducted a sixth nuclear test. According to North Korea, it conducted a successful test of a hydrogen bomb. It was reported that tested the hydrogen charge can be placed on an Intercontinental ballistic missile. However, such actions North Korea has forced the international community to respond.

Dnia gathered reaction from politicians and international organizations to the test of North Korea.