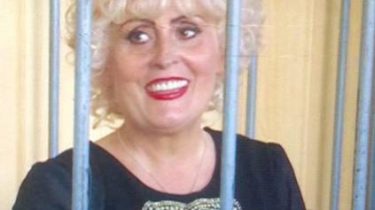 Lenin regional court of Kharkov was interrogated three more defence witnesses in the case of ex-mayor Sloviansk Neelie Shtepa, accused of infringement of territorial integrity and inviolability of Ukraine and participation in the activities of a terrorist group. This was told by lawyer Alexander Shadrin, writes UKRINFORM.

“The court questioned the three defense witnesses, who came from Slavyansk. They showed that during the events of 2014 Shtepa were in captivity in militant, where she was beaten and that she removed the Russian flag from the building of the city Council and established the Ukrainian”, – said the lawyer.

Dancing the hopak, can not be quiet. As for the Network comment on release Shtepa

According to him, Shtepa was present at the trial: “On her arm a bracelet. The characteristics and dimensions of the device can not only track the location of a detainee, but also, if necessary, to convert it for the enjoyment of listening to.”

The next court hearing is September 26.

We will remind, Nelly Stepu accused of encroachment on Ukraine’s territorial integrity and the creation of a terrorist organization. Investigators insist that in 2014 Shtepa urged residents Slavyansk to support the separatists and Russian invaders. And today it was reported that Nelya Shtepa at the time refused to go on exchange to militants. This was reported by Vice-speaker Irina Gerashchenko. The former head of the Slovyansk militants have made in the so-called lists of the dismissal. But Shtepa flatly refused such an exchange. Today, the defendant said the exchange did not go – because he wants to prove his innocence.