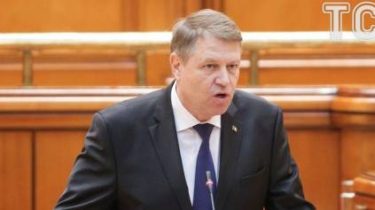 The Ukrainian foreign Ministry claimed that the visit of President of Romania Klaus Iohannis in Ukraine is not canceled and postponed.

This was told in the press service of the foreign Ministry of Ukraine, writes UNIAN.

“The visit is not canceled and postponed”, – is spoken in the message.

Also the foreign Minister noted that the corresponding note received last week. “This is an exclusive decision of the Romanian side,” – said the Minister.

“We are disappointed with the reluctance of the Romanian side regarding the dialogue between the leaders. Internal discussion should not negatively affect bilateral relations. We confirm our interest in continuation of constructive dialogue and look forward to its continuation in the near future”, – added the foreign Ministry.

We will remind, earlier it was reported that President of Romania Klaus , Johannes cancels visit to Ukraine due to the adoption by the Verkhovna Rada of the new law on education, according to which in 2020 the country will become fully Ukrainian. He noted that the new Ukrainian law “will sharply limit the access of minorities to education in their mother tongue”.

On 5 September during a meeting of the Rada adopted the law of Ukraine “On education”, which introduced the 12-year secondary education. The language of instruction in educational institutions determined by the state. The document envisages that the institutions can give one or more courses two or more languages – the state language, English and also in other official languages of the European Union.

Subsequently, in Russia, this law called “an act of forced Ukrainianization, which constituted a flagrant violation of Ukraine ratified the European Charter for regional or minority languages”. “Deridum” the Russian Federation has prepared a statement in relation to the Ukrainian law on education, in which he condemned adoption by the Verkhovna Rada of the document. The Russian foreign Ministry stressed that the document infringes on the interests of millions of Russian-speaking residents of Ukraine.