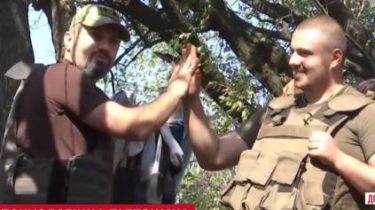 Military psychologists work in positions 72-th brigade in the ATO area near Verhnetoretskogo. Life in the trenches, lack of sleep, the death of the brothers is something that requires professional support, says the story TSN.19:30.

Psychologists say that the main objective is to help men to control their fear and anger. “We give the team, but gently,” says Rodion Grigoryan, who himself looks back on a soldier’s combat experience. It helps the psychologist to quickly find an understanding with the soldiers and to choose convincing examples, how to behave under stress, provide psychological support to each other and the like.

Not the rumors about stress and its effects on soldier knows the call sign “Preacher”. In the 72nd brigade, he is more than a year, and saw almost all of what he told the psychologist. “The greatest psychological pressure – the expectation when you’re constantly in suspense and not know what will happen in a minute, two, ten,” he says.

A two-hour training, psychologist at Rodion Grigoryan promised to continue when the team will bring to the landfill, because the focus, when the enemy is so close is not easy. And when psychologist positions no, it is the function of the dog is Kaiser – he is only 5 months, but my goal is to be a psychological discharge for the soldiers he is already able to perform at 100%.