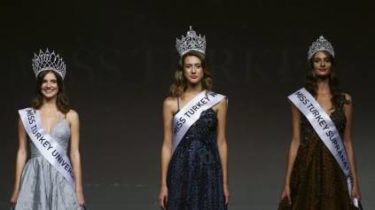 Just a few hours after his victory in the contest “Miss Turkey” 18-year-old Itir Esen was disqualified because of inappropriate tweets.

This was reported by Ukrainian service of the BBC.

So, the contest organizers discovered that around the anniversary of bloody coup attempts in the country, which killed 250 people, she wrote these words:

“This morning I’m on my period – in honor of the victims of July 15. I celebrate this day by hemorrhage, which is the blood of our victims.”

The organizers called it “unacceptable” and reaffirmed its decision to disqualify the participant for a few hours after her win.

“We’re sorry to inform that this tweet belongs to itir Esen. For “Organization Miss Turkey” is impossible to maintain such a position, because it represents Turkey to the world and affects its image,” explained the organizers my decision.

Esen in his Instagram said that had no political motives.

“I was raised to respect the Motherland and its nation,” she added and apologized for the fact that she “did not understand”.

At the contest “Miss universe” Turkey will be represented by Vice-miss Asli Sad.

Recall that recently in Kiev have chosen the representative of our country at the contest “Miss World 2017”: winner of the title “Miss Ukraine 2017” became a young student of Pauline weaver.

The girl’s mother, Tatiana, before the beginning of the show from worrying about daughter barely holding back tears. But the younger sister of the winner Ekaterina touching cried, greeting her after the announcement of the results.