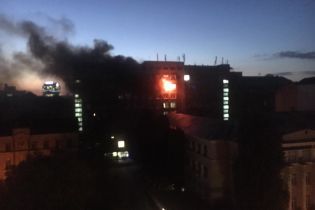 27 September, firefighters received a report of a fire in a room on the 8th floor in the building of one of capital University on Volodymyrska street, 72.

About it reports GU gschs of Ukraine in Kyiv city in Facebook.

On a scene immediately there arrived rescuers of the nearest fire and rescue units. Having arrived to a place rescuers started fire extinguishing. The fire was liquidated on an area of 30 sq. m. in addition, during suppression of fire firemen have rescued a man born in 1948. The soldiers brought the rescued to fresh air and transferred to the medical service workers.

“Chemical lab rescue group of a special purpose of head Department gschs of Ukraine in Kiev on the 8th and 9th floor of the building was carried out measurements of air for harmful substances. Harmful substances are not revealed”, – is spoken in the message of rescuers.

The scene has 19 units of basic and special firefighting and rescue equipment and 56 personnel.

The causes and circumstances of the fire will establish a consequence.

In the center of Kiev broke out a big fire

We will remind, on the night of 16 September in Odessa burned the municipal children’s recreation and sports camp “Victoria”. At the time of the fire in the camp there were 150 children. In the building, which caught fire, was 42 children. Three children died during the fire, two more were injured.