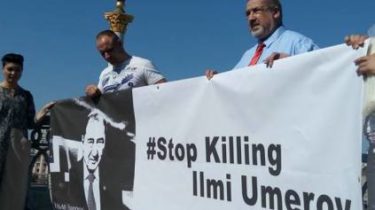 The Rapporteur of the monitoring Committee of the parliamentary Assembly of the Council of Europe on Ukraine Axel Fischer, has strongly condemned the verdict of the Crimean “court”, Deputy Chairman of the Mejlis Ilmi Umerov.

“It is unacceptable that the Russian government pursues and detains Ukrainian citizens for their opposition to the illegal annexation of the Crimea, I therefore call on the Russian authorities to immediately and unconditionally release Mr. Umerov,” said Fisher.

“In the Crimea betrayed the Ukraine is judged not to betray”: the dead made a strong speech in court

“I remain a supporter of the return of the Crimea to Ukraine”. Umer reacted to the verdict

We will remind, the Simferopol district court, which is controlled by Russia, on Wednesday, September 27, issued a verdict in the case Umerov. Umarov: he was sentenced to two years in colony-settlement. Russian occupation authorities in Crimea accused Umerov extremism. To such conclusion the FSB came from the statement of the Deputy Chairman of the Majlis of the channel ATR. In addition, it was reported that by decision of the Russian occupation authorities in Crimea the activities of the Mejlis of the Crimean Tatar people is forbidden, and for every fees Majlis will open criminal proceedings.