Poroshenko convene the war Cabinet after the explosion region 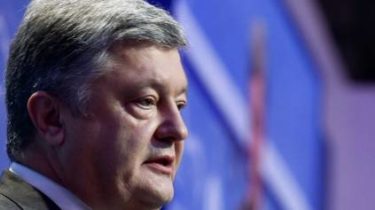 The President of Ukraine Petro Poroshenko has decided to convene a war Cabinet because of an emergency at the arms depots in Vinnytsia region.

“Decided to convene a war Cabinet with the participation of the Prime Minister, NSDC Secretary, Minister of defence, the chief of the General staff, the head of the SBU, as well as leadership of national police, national guard and emergency Services immediately after their return from Vinnitsa,” – said the head of state.

According to Poroshenko, having received the report of the chief of staff and head of the SBU, he immediately instructed them to fly to Vinnitchina, and during the night received information of the headquarters for the liquidation of the accident from the Prime Minister and defense Minister.

“I want to note the effective actions of Central and local authorities during the evacuation of the population. I would also like to thank all the volunteers who help save people,” the President added.

Recall, September 26, at about 22:00 there is information about the explosions of ammunition in the Arsenal of the defense Ministry of Ukraine near the town of Kalynivka. Implemented alert residents of Kalinovka and settlements in the 10-kilometer zone (Pavlivka, Medvedka, Road, Seal, Stryzhavka).

Videocamere houses were damaged in the explosions of ammunition in Kalinovka

There is an evacuation of the residents of Kalinovka and surrounding villages. According to preliminary data, suffered two people.

The traffic is closed for all types of transport on the highway of state importance M-21 Zhytomyr – Mohyliv – Podilsky. In addition, closed by the movement of railway transport on the stretch of Pine – Kalynivka regional branch “South-West railway”, also closed air traffic in a radius of 50 kilometers from the town of Kalinovka.

Fifty trains changed routes because of explosions at military depots in Vinnytsia region. The movement delay is more than 5 hours.