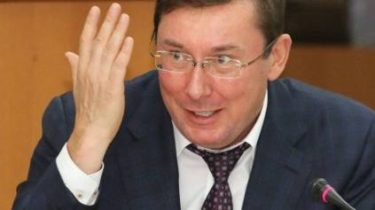 For the last time, when Ukraine entered into force the law on special confiscation of funds stolen through corruption, from the accounts of the former President of the fugitive Viktor Yanukovych and his “family” confiscated 1.7 billion dollars – $ 1.5 billion before, and $ 200 million recently.

Prosecutor General Yury Lutsenko is convinced that Yanukovych will not be able to get this money back through the European courts, because had acted within the law, according to the decisions of the courts. About this Lutsenko said in a live program TSN.Week.

“Inform the two key figures. The first – scientific examination, officially conducted by the Academy of Sciences of Ukraine, the losses inflicted by the regime of Yanukovych to the Ukrainian state, up to 40 billion US dollars. This is one of the annual state budget. It is therefore not surprising – the second number – the first day of the Prime Minister Yatsenyuk, who has taken up this position after independence, the state Treasury was the amount less 10 thousand dollars. All – on pensions, on healthcare, on the road to war. 10 thousand dollars! Therefore, the $ 1.5 billion that we could order special forfeiture back to the state budget, are only part of the looted organized criminal group of Yanukovych. These funds are returned in accordance with the law, in accordance with the decisions of the court and they raise questions only from those who previously worked in the departments Kurchenko and Klymenko. Now call themselves community activists and scream about any possible return. Again, so many Yanukovych stole from the Ukrainian people, he so robbed the country that the return of these funds may not speak any sane person. We did everything according to the law and the legitimate decisions of the court that came into legal force,” – said Lutsenko.

The confiscated money will go to various programs and needs.

“The money is not simply a return to the state budget. These funds have already been allocated by the Verkhovna Rada of Ukraine and already working for the army (for the purchase of anti-tank systems), construction of roads, it is planned to upgrade the 1,700 rural health posts, to introduce a system of fingerprints on the Ukrainian-Russian border and a lot of other useful things,” – said Lutsenko.

Meanwhile, the examination found no signs of separatism in the statements and documents Yanukovych.