The courts are 4.2 thousand cases on the bribe-takers. 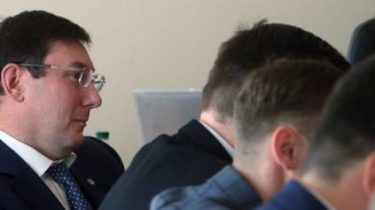 In Ukraine, the ongoing judicial reform, which has a lot of questions. For example, in the Supreme court are the people who imprisoned members of the current government, for example, Prosecutor General Yury Lutsenko. And a special anti-corruption Prosecutor Nazar Holodnitsky carry bundles of dollars.

On the question whether there is meaning in the activities of prosecutors in General, if the judicial system everything is back to normal, in a live program TSN.Week said Prosecutor General Yury Lutsenko:

“I’m still in prison said that’d be the biggest optimist of the country. And they remain. Yeah, it’s really not easy. Yes, it’s not the way we wanted in our dreams on independence. Nevertheless, for half a year in this position we were able to detect more than 7 thousand corrupt acts and 4 thousand bribe-takers and plunderers are in the courts. Emphasize 4.2 thousand bribe in the courts. So my biggest dream is that we have courts,” he said.

Lutsenko said that the problem is not only in quality but in the number of judges.

“The problem is not only in what judges are, but how many of them there are. In Pechersky court of Kiev only five judges are considering hundreds of the most high-profile cases. So the question is, in addition to integrity of judges, which, of course, is the number one issue, there is the question of the number of judges. I support the idea of creating an anti-corruption court to deal with proceedings in the VIP-corruption. But also in parallel until all of it is created (for at least a year, maybe more) we need to fill the courts with new judges elected on a competitive basis, who will be able to perform the role of anti-corruption judges on existing, fixed, transferred to the court cases,” – said the Prosecutor General.