Matios: in the Donbas are Russian troops, which are equal to the forces of almost all NATO countries 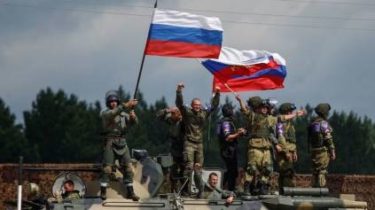 The Donbas is now as much Russian forcesequal to the forces of almost all European countries-members of NATO.

About it on air of TV channel “112 Ukraine”, said the chief military Prosecutor of Ukraine Anatoly Matios.

Matios also listed the weapons that are now used in the occupied territories, and called her number.

“Tanks – 650, armoured combat vehicles – 1310 PCs, artillery of various calibers (including velykosillia forbidden by the Minsk agreements) – nearly 500 guns, rocket systems of volley fire – nearly 260 units, anti-aircraft missile complexes up to 100 units,” – said he, stressing that all these weapons are Russian.

“The Russian Federation is now in the Donbas in the amount of nearly three thousand people, consisting of two bataljona task groups, one rotno-tactical groups armed with, in addition to the above units, nearly 200 tanks, 400 armored combat vehicles, 140 artillery pieces and latest designs of anti-aircraft missiles,” – said Matios.

He also osweicim information about Russian military units in the occupied Donbas.

According to him, the total number of Russians in the Donbas is 11 thousand, including three thousand military personnel.

Recall, from 14 to 20 September in Belarus held joint military exercises “West-2017”. They occurred on the territory of this country and the Kaliningrad region of Russia near the border of Ukraine and the Eastern borders of NATO. According to official data, were involved in 13 thousand soldiers and 250 tanks.

In the NSDC of Ukraine said that the real number of participants – up to a quarter million troops. NATO is concerned about the activity of Russian and Belarusian troops and believe that the exercises are aimed at provoking the member countries of the Alliance.