In Kiev, near the Ministry of infrastructure, a fire broke out 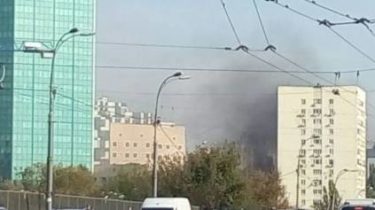 In Kiev, between the building of the Ministry of transport and the hospital “OKHMATDYT” there was a fire.

About this TSN.ia said an eyewitness.

To the scene arrived two fire trucks and an ambulance.

In Zaporozhye detained the owner of the building, where an illegal hostel killed the hotel

According to the witness, the traffic on the street Chornovil on Victory Avenue is blocked, and the place is a lot of people.

We will remind that earlier in Kiev during the fire in the hostel, five people died. Another three, including 8-year-old child, firefighters managed to save. Now victims are in intensive care. The two-story building caught fire about three in the morning, the salvation came fifty firefighters. However, the release of people from fire traps could not immediately.