The Parliament adopted the pension reform. A roll-call vote 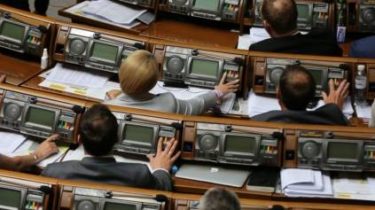 The Verkhovna Rada adopted the bill on pension reform.

For the adoption of document No. 6614 second reading and in General voted 288 deputies out of 346 in the audience.

“I think now we will take a truly historic decision on the establishment of a fair pension system in our state. It is not very easy, but this important decision will give the opportunity in October to no less than 9 million pensioners to raise pensions, as we promised. From that month will be set spravedliva pension system, eliminated uravnilovka and taxation of pensions. We will do everything to pensions has been systematically growing, but it becomes possible when there is your support. So I am asking each MP to cast your vote, click saleno button and make this historic decision in the name of Ukrainian citizens”, – said before the vote, Prime Minister Vladimir Groisman.

Against voted 8 deputies, 23 decided to abstain. Meanwhile not voted for a historic document 27 deputies.

Speaker of Parliament Andriy Parubiy after the vote congratulated the representatives of the government with the adoption of reform.

In turn Groysman thanked all those present for their support.

We will remind, Rada approved the bill, which runs the pension reform and needs to create a fair system of pension insurance. The bill restores the differentiation of pensions depending on the received income and insurance experience. In addition, must be a renegotiation of the allocation (indexing) pensions, and the annual recalculation of pensions by increasing the average wage.

After the adoption of the laws on pension reform , the minimum pension in Ukraine will increase by 11% (140 UAH) – from the current 1312 1452 UAH to UAH for those who have sufficient insurance experience.These figures cited by the press service of the parliamentary Committee on social policy, employment and pensions, with reference to the Chairman of the Committee Lyudmila Denisova. In case of acceptance by deputies of the pension reform from 1 October for appointment and recalculation of pensions applies a living wage stipulated by the state budget on December 1, 2017. That is, from October 1, the subsistence minimum for retirees who have full insurance will be 1452 UAH.