In Kiev, the judge loved that to death starved son. The daughter managed to survive 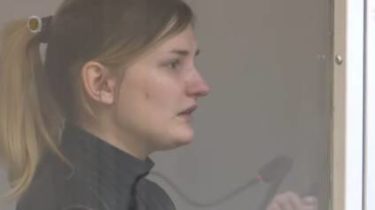 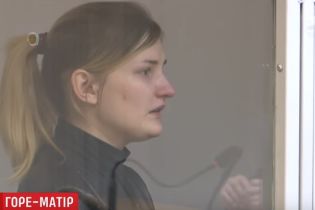 Ten months have passed and finally today the court has deprived of parental rights has been accused of premeditated murder of the son of Vladislav Trokhimchuk and her official husband. The girl is miraculously saved after 10 days will receive orphan status. It, along with a year-old brother, a grief-mother winter shut down without food for nine days, in the Kiev apartment. The boy from starvation then died. And coincidentally, judge Trokhimchuk also started today. Prosecutors read out her charges. The woman did not repent, but asking for freedom.

At the beginning of the process, she comes all in black, and from time to time, carefully wiping the tears. The Prosecutor reads the indictment – for murder of the son of Vladislav Trokhimchuk faces from 15 years imprisonment to life.

The guilt she does not recognize and dreaming of freedom. In the ten months I spent in jail, she allegedly acquired diabetes mellitus. On the outside wants to be treated and to work.

In the hallway this process keeps Kiev wife. They say they are witnesses in the case, in the hall to be they are still allowed. The tragedy is that in December shook the entire country happened in their apartment. The defendant Trokhimchuk with her lover in rented accommodation in the capital six months. Two young children from his first marriage the woman left without food for nine days, and she with third newborn daughter went to live with her grandmother roommate. In the apartment where the children died, the hosts were once, they say, there is not even removed:

“For us it’s a shock. We are in the apartment by this time can not go. This is a concentration camp for children was. How to go back? We talked to the neighbors – the crying of children heard constantly and regularly”.

Videogenie, which led to starvation of the son, deprived of parental rights to daughter

One-year-old Daniel died, and two years Anya barely saved and gave custody to the state. And now – after 10 months – coincidentally, the same court has finally deprived of parental rights to the girl. If no one appeals the decision within ten days, the child will receive the orphan status. About a grief-mother learns from journalists, however, did not react.

The court continues her detention until Dec. The next hearing is appointed in a month, because, they say, not enough judges. With the pace no one knows when the would-be mother will announce the verdict. Witnesses in the case – 19. It can consider a year and a half.

At the same time, the absurdity of the situation is that the defendant is still the legal mother of a third child from her lover Anton. A dispute over the younger daughter is still in progress – the roommate Trokhimchuk wants to raise the child himself. Now the sisters live together in a temporary foster family. In the custody of TSN said that the fate of the sisters is not yet decided. To separate, want to give two up for adoption.