“Poklonskaya is Judas.” Supporters of the “Christian state” blacklisted “nyash-myash” and Kadyrov 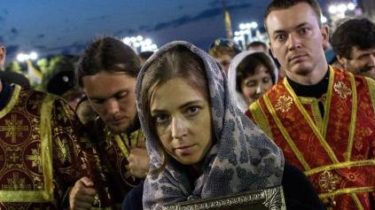 Supporters of the Russian organization “Christian state” made to your blacklist scandalous “honorable” Natalya Poklonskaya and the head of Chechnya, Ramzan Kadyrov.

In particular, a blacklist posted on the website www.russiansk.ru, the creators of which are supporters of the movement “the Christian state of Holy Russia”.

“Natalia Poklonskaya first “handed over” the most active defenders of the Orthodox faith when she was not profitable. Christian state defends its interests in a civilized, comprehensible ways. But the logic of the Deputy Poklonskaya becomes less clear to the people. If tomorrow is going to arrest Ramzan Kadyrov for the persecution of gays in Chechnya, According to the first report that it happened according to her… the Sin of betrayal far worse than the sin of sodomite. Poklonskaya is Judas, the traitor defenders of the Orthodox faith, sold for thirty pieces of silver not only Sasha Kalinina (leader organization), but sold the faith,” say the authors of the list.

On the eve of Kadyrov supported Poklonsky in its fight against the notorious film about Tsar Nicholas II “Matilda”.

“A poison for her indomitable will, strength of spirit and a clear position those who do not have any relation to the Homeland or to the people”, – he said.

Due to “Matilda”: the media reported the reason for the arson of the cinema in Yekaterinburg

We will remind, in Russia have detained Alexander Kalininwho, on behalf of the organization “Christian state” has sent letters to theaters to refuse to show “Matilda”. On 23 September , he was arrested. Kalinin was detained and was questioned on suspicion of arson car in front of the office of the attorney representing the Director of “Matilda” by Alexei Uchitel. Kalinin was charged under article 179 of criminal code “Coercion to commit the transaction or reject the transaction”.

Earlier, Poklonskaya sent a request to the Russian Prosecutor General with the requirement to check the script of the movie “Matilda. Mystery of the Romanovs”. In her opinion, “the authors of the paintings, under the guise of freedom of creativity, among other things, violate the right to inviolability of private life of Tsar Nicholas Romanov and His Family.”

Videoarchive responded to the words about Poklonskaya bust of Nicholas II