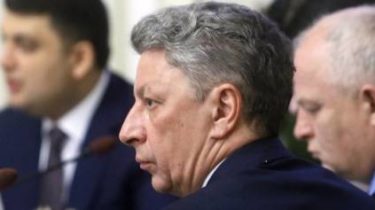 “The opposition bloc” sharply criticized the sensational bill on the reintegration of Donbass.

According to the leader of the political power of Yuriy Boyko, the law is not on reintegration, but on the separation of Donbass, so the “opposition bloc” in any case, not to support it.

“Pushing through such a law on the reintegration of Donbass, and more precisely – about the separation of this part of the country, it is a crime against the state, it is a direct violation of the Minsk agreements, which the world recognized as the only option for a diplomatic resolution of the conflict in Eastern Ukraine. Therefore, we are categorically against the bill in this form. We will vote against”, – said the leader of the opposition.

Boyko stressed that the force stand on the fact that the restoration of territorial integrity should occur through diplomatic channels and appropriate “road map” which will allow you to do this.

“The next generation will ask of the present what it did in order to return the territories. This bill no. On the contrary, he separates the territory of Ukraine. The process that started in Minsk must continue. The ultimate goal is the return of territories and people into the country”, – said the politician.

We will remind, the law on the reintegration of Donbass had to make to the Parliament on 4 October. In the law of Russia will be identified as the aggressor, uncontrolled territories are referred to as the occupied, and we will focus on the admission of a peacekeeping mission.