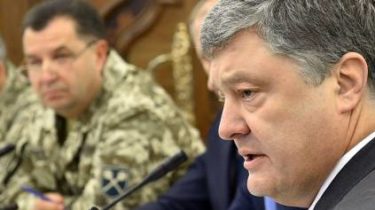 The President of Ukraine Petro Poroshenko on 3 October signed a decree enacted the decision of national security Council and defense of Ukraineon military-technical cooperation with other States.

Relevant information contains on the website of the Ukrainian President.

The Council has adopted the relevant decision at meeting on 13 September. This document amends the NSDC decision of August 28, 2015 “On military-technical cooperation with individual States”.

It is noted that this document is secret.

Monitoring the implementation of the NSDC decision rests with the Secretary of the Council Oleksandr Turchynov. The decree Poroshenko comes into effect from the date of its publication.

The Russians – by biometric passports. Poroshenko enacted NSDC decision on strengthening control over the border

We will remind, the chief of the General staff of Ukraine Viktor Muzhenko said that negotiations with the administration of U.S. President Donald trump on providing lethal defensive weapons to Ukraine is complete. “We expect a decision in because all the negotiations were completed, and the relevant questions were agreed – on the list and the types of weapons and we can only expect political solutions to our partners,” he said.

The US administration and both parties in Congress in favour of granting Ukraine lethal defensive weapons. But the final decision rests with the President of the United States Donald trump.