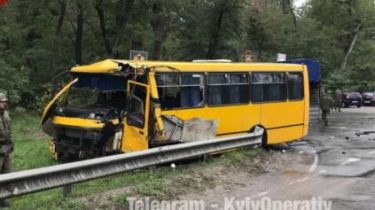 In the hospital of Vyshgorod, Kyiv region, delivered five military that today, October 5, injured in a fatal accident with the bus of the national guard.

It is reported by the correspondent of TSN Anton Strashko.

Two minor injuries have been immediately released. The third, assisted on an outpatient basis, too, he had left home.

In turn, the two victims are in intensive care. One of them is in a stable condition, now the issue of transporting him to a military hospital.

Military in critical condition was transported to the Kiev Institute of neurosurgery for severe traumatic brain injury.

Earlier it was reported that the deadly accident occurred at about 7 a.m.one person was killed and 8 were injured. Passenger bus service “Dymer – Kiev” has faced bus of National guard of Ukraine, which was moving in the column. In the accident, a soldier was killed, 7 soldiers and one passenger public transport were injured.