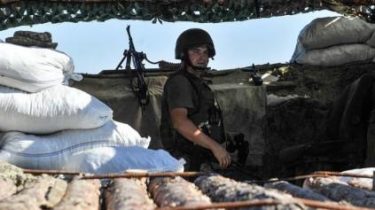 In General, over the past day militants in the Donbass 19 times violated the truce. In the fighting, two Ukrainian soldiers were injured.

#Topod the Construction of the press center of staff ATO in 4.10.2017. At the end of the last days the situation in the ATO area…

Posted by the Press center of staff ATO on Wednesday, October 4, 2017

Night fighters were active mainly in the direction of Donetsk. After 18 hours they are with grenade launchers and small arms fired twice position on the outskirts of the town, was also beaten in the area of Nevel. And about 20 hours, as a result of grenade fire near Novoselivka Druha injured one soldier.

At the direction of Lugansk at the end of the day terrorists twice shelled with mortars caliber 82 mm on the Ukrainian fortifications near the Crimean. Near the same village, they are actively used grenade launchers and heavy machine guns.

On the Mariupol direction in the afternoon as a result of military confrontation near Krasnogorovka received shrapnel wound in one Ukrainian military. In addition, under the fire from heavy machine guns and small arms in the evening turned out to be strongholds near Water.

Recall that the militants have again started to use “Grad” in the Donbass, despite the school truce. In particular, on October 3, they for one hour fired at positions near Shyrokine this weapon.