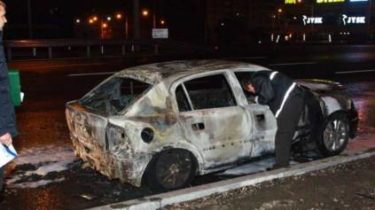 On the night of October 5 in the capital of the Great ring lit up Opel with Lithuanian numbers, according to Kyiv online on his page on Facebook.

The incident happened at about midnight near the last stop of light rail No. 3. According to eyewitnesses, at first rocked by a loud explosion, and after they saw the burning car with Lithuanian numbers.

As a result of fire the car is completely burnt out inside. To the place of road accident there arrived two fire trucks and four patrol. The causes of the fire law enforcement is not called and do not allow comments. About the victims in the explosion is also not reported.

We will remind that yesterday in the Lviv region faced two trucks, killing one of the drivers was killed.