The important thing about pension reform. What to expect current and future pensioners 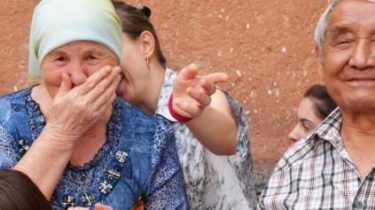 Ukrainian pensioners retroactively, from October 1, will increase payments to 200-1000 UAH.

This follows from the government bill, which took the Verkhovna Rada. However, the document has not yet entered into force because it was not signed by the President.

The government promised that the recalculation will be done automatically (refer to the Pension Fund people do not need) for two or three days and allowances will be paid in October. Those who have already received their pensions for October, will make additional payments. The recalculation will affect 9 million pensioners.

Video of the month will be set a fair pension system, – Volodymyr Groysman

MODERNIZATION OF PENSIONS FROM 1 OCTOBER 2017

The average pension will grow by UAH 700. Versatile calculator, with which it would be possible to determine the amount of allowances, no. The size of payments to each to determine individually, taking into account salary and length of service.

Why need modernizing? Because people who have worked the same number of years in the same industry, but retired in different years receive different pensions, the size of which may vary three times. For example, a miner with insurance experience 46 years I retired in 2008 – gets 3311,87 UAH. And another miner with the same insurance experience retired in 2016 and gets 8446,21 UAH. Such a big difference due to the fact that the pensions of Ukrainians depends on three factors: the employee’s salary, length of service and average salary in Ukraine, which applies when calculating pensions. The average salary is growing every year, therefore, the pensions of Ukrainians should sovremennitsa. However, the last time this modernizing has occurred in 2012, and applied then the average salary in Ukraine in 2007 is UAH 1197,91. In recent years, the average salary has increased three times, while pensions increased minimally. Now two-thirds of the payments do not even reach the subsistence level.

So will be recalculated and updated all previously granted pension by the same rules of calculation of pensions, regardless of in what year was granted a pension according to the materials of pension business, says the Ministry of social policy. The basis will be taken the same for all, the average salary over the past three years (2014-2016) in the amount of UAH 3764,4. Also take into account the cost of living index for disabled citizens established by the state budget on December 1, 2017, increased by UAH 79 (1373 UAH + UAH 79 = 1452 UAH), in lieu of such index as of October 1, 2017 (1312 UAH). To a living wage tied to the minimum pension.

INDEXATION OF PENSIONS IN 2019 AND IN THE FUTURE

For the future provided an automatic recalculation of pensions taking into account growth of average wages and inflation.

From 1 October 2017, working pensioners will receive 100% of the pension. Previously, the state did not pay extra for such persons is 15%.

With the salaries of working pensioners will be to calculate the contributions to the Pension Fund and taxes.

INSTEAD OF RAISING THE RETIREMENT AGE – INCREASING DEMANDS TO INSURANCE EXPERIENCE

Officially the retirement age is not raised and in the required insurance seniority can retire at age 60. However changed the requirements to the insurance period required for retirement. Now he is 15 years old. Next year it will gradually increase, and pensioners will be divided into three categories – 60, 63 and 65. The older a person is, the less requirements to the insurance period. “No luck” of today’s youth, who will retire after 2028 – then insurance experience for all will be 35 years or more.

For those who have not enough insurance length, it will be possible to retire later or to purchase the state required years of insurance experience. Amount paid single fee for each month of such period may not be less than the minimum premium multiplied by the factor 2. That is, one year will cost about 16,8 thousand UAH for two years – 25,3 thousand UAH.

Those who are not worked or worked for themselves and did not pay insurance premiums, will be eligible to retire by age 65 years. The requirement for insurance experience left at 15 years. So they want to make to pay voluntary contributions for those who hide their illegal earnings working abroad. Provides for the possibility of lump-sum payment of insurance premiums.

An important caveat: at the time of calculation of insurance used a factor of 1.35. This affects the amount of pension. Henceforth, the ratio will be 1 – that is, what is earned is what you get. This innovation is attributed to the fact that in the future to automatically increase (are indexed) pension.

Retain the right to early retirement for:

– mothers who have raised 5 children or disabled since childhood (50 years);

artists (subject to availability of service from 20 to 35 years);

journalists, in case of injury, concussion, injury received in the performance of official duties in the field of extreme events;

of Chernobyl (with a reduction in the retirement age).

THE SIZE OF PAYMENTS TO WOMEN WHO RETIRED EARLY

Temporary state social assistance from 1 January 2018 to 31 December 2020 will be assigned to unemployed persons who have reached retirement age have the insurance experience not less than 15 years, but has not acquired the rights for a pension for the period prior to the acquisition of rights to old-age pension to the subsistence minimum for persons incapacitated.

MILITARY PENSIONS AND OTHER CATEGORIES

– the introduction of professional pension systems (for certain categories of professions that now have preferential status);

– the order of amounts of pensions, the payment of which the retiree was entitled but did not receive in connection with the stay on the temporarily uncontrolled state power of Ukraine territory.

From 1 January 2018 Ukraine will be abolished the special pensions for MPs, civil servants, prosecutors, employees of the diplomatic service, and researchers.

WHERE CAN YOU FIND OUT YOUR INSURANCE PERIODS AND FUTURE PENSION

Find out all details about themselves on the website of the Pension Fund. But to create a personal electronic office, or need a personal electronic signature, or a written statement to the Pension Fund. With him necessarily need to have a passport and original identification code. Card on compulsory social insurance is no longer needed, because it is not used, because there is an electronic resource. This is stated in the story of Olga Koshelenko in the program TSN.19:30.

After registration of the written application, issue a special code to create a personal account on the site. In personal Cabinet you can see all the information that is, premiums from 2000 and watch your experience.

Also in the Pension Fund you can get help, which shows all work history – in the measurement of pension contributions. That is, you can see which employers have made contributions to the Fund, who is not, who did it with the minimum wage. The Pension Fund suggest such or to sue or to accept.

An expert in retirement Marianna Onufryk said that to sue the employers because of the small contributions to the Pension Fund, it makes no sense, it’s nervous, but nevyigrysh case. Better make sure that in the future was an official salary with regular contributions to the Pension Fund and, respectively, increased insurance experience is all that will affect future retirement. Unless, of course, until 100 times change. Marianne advised to monitor these figures on the Fund’s website.

“We had in the legislation the conditions that allowed you to pay one-third of the minimum contribution and thus one month of experience is counted when a person worked for three months,” says a member of the public Council under the Pension Fund Marianna Onufryk.

Another exclusive opportunity to accumulate through private pension funds. Then a well-deserved retirement, you can receive money from multiple sources. Of course, if the pension Fund you will survive.