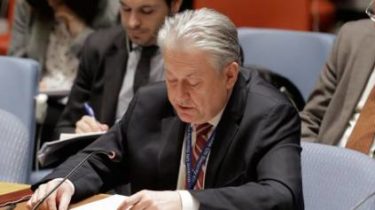 Despite the large-scale aggression from Russia and forced the armed opposition to the occupiers of Ukraine will remain a reliable partner of the UN in peacekeeping operations.

This was stated during a meeting of the UN security Council permanent representative of Ukraine Volodymyr Yelchenko, writes UKRINFORM.

He noted the possibility of significantly increasing the efficiency of the implementation of mandates of UN peacekeeping. First of all, according to him, the UN security Council should “bring a new level of dialogue with the countries-contributors of military and police contingents, as well as to continue comprehensive consultations with the establishment and renewal of mandates.

In his opinion, the mission should obtain a clear, agreed, achievable, coherent and robust mandates”, according to the main provisions of UN peacekeeping.

According to him, also need to carefully assess the practical progress of each mission, carefully consider and if necessary, amend existing mandates, focusing on support for the political settlement of the conflict”.

Regarding gaps in the capabilities of peacekeepers, the representative of Ukraine drew attention to the need to ensure missions proper funding, providing them with sufficient support aviation, both military and transport), as well as the use of advanced reconnaissance technology.

Recall that the support of the international community resolutions on the placement in the Donbass UN peacekeepers will not leave a chance of Russia to veto it. This was stated by President of Ukraine Petro Poroshenko, informs UKRINFORM with reference to CBC News. In his opinion, the UN peacekeepers on the Ukrainian-Russian border would create conditions for the reintegration of Donbass.

Earlier, Poroshenko appealed to the UN initiative to deploy a peacekeeping mission in the Donbas. The Ukrainian side insists that the peacekeepers should be present throughout the occupied territory of Donbas, including Ukrainian-Russian state border.