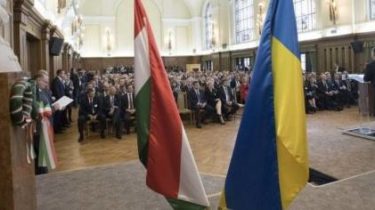 Will soon begin implementation of the educational system. Of the items next year will be taught in Ukrainian. Math is also in high school.

As stated in the story TSN.Week, one of the largest Hungarian speaking schools in Transcarpathia to find a child who speaks Ukrainian, it is difficult. Schoolchildren are learning Hungarian, and Ukrainian they are taught several times a week. Therefore, the vast majority comes from the schools almost without knowing the language of the country in which he lives.

“Local Hungarians, you can see it, respect the laws of Ukraine. If your country goes this way, it can not just forgive. It would actually mean that the Hungarians here will not” – said the government Commissioner in the matter of Ukrainian-Hungarian relations Istvan Gresa.

Under the new education act, all Hungarian-language children with grade 5 should switch to partial teaching in Ukrainian. The adopted law significantly changes the use of languages of national minorities, but increases the chance for these graduates to enter the Ukrainian universities to the public service and adaptation outside the Hungarian enclave.

After signing by the President of the education act, our state has felt the sharp reaction of several States. Their dissatisfaction with the law expressed the Ministry of foreign Affairs of Poland, Romania, Moldova and Hungary.

The President of Moldova called educational changes in Ukraine with shame and contempt for minorities, the President of Romania, in protest, canceled a visit to Ukraine, and Hungary filed a complaint with the UN, EU and OSCE. This was only the beginning. In addition to statements from official Budapest as “a knife in the back,” Hungary said, will block any rapprochement of Ukraine with the European Union.

“Stab in the back”. Hungary and Romania are going to fight against the “narrowing” of the rights of national minorities in Ukraine

Statement of Hungary have become the most acute and conflict has moved to an unprecedented level. The threat of the official Budapest to block any actions of Ukraine in matters of European integration is a powerful punch with a hint of blackmail.

During the visit, the correspondent of TSN.Week in the largest Hungarian speaking village in Transcarpathia. Local holiday with a visit there came the wife of the President of Hungary Anita Herceg. She visited the children’s orphanage “the Good Samaritan”, which is held on the Hungarian money and met the marathon in Budapest. The participants were 30 doctors and nurses from Hungary. They carried out a medical examination of children. This is one example of how Hungary cares about its people outside the country. Such visits to Hungarian high-ranking officials, in contrast to the Ukrainian to Hungarians of Transcarpathia are permanent.

“They were out of sight of official Kiev. It is not only a question of language rights, this is an economic issue, social security. It’s the poor areas that have relied solely on their own strength and the help of metropolises – that is, Budapest, Bucharest,” said journalist and political analyst Dmitry Turzanski.

Turansky is one of the best analysts of the Hungarian issue in Ukraine. He says that Ukraine is, to put it mildly, 25 years old did not pay attention to minorities. “Not only drew attention, but never even tried. Wasn’t trying to hear, to understand. Work with national minorities is not something that was conducted, it was not,” he said.

That day the wife of the President of Hungary refused from any comments. She was met by a large landing Transcarpathian officials. Hungarians in this region are friends because they invest huge money in the development of Hungarian-language villages, of which there are hundreds. Transcarpathian officials are not the best diplomatic war with Hungary. With the coming to power of Prime Minister Viktor Orban infusion and support of the Hungarians of Transcarpathia has increased significantly. Loans and grants for business development in the villages have become commonplace, Budapest pays teachers. schools, repairs and new builds.

Hungarians recently opened in Vinogradovo new children’s Department. For a small district center on the border with Hungary is a major event that they associate solely with the attention of a neighboring state. To be treated here can all: Hungarians, Ukrainians, Roma.

The Hungarian-language villages does not sound Ukrainian. Children, starting with kindergarten and ending with the school – learn Hungarian, with only a few hours a week Ukrainian. So after they do not associate their future with our state. Therefore, probably, it is logical that in 25 years here has formed their linguistic enclave that is trying to protect Hungary.

In Transcarpathia, the terrorists planned to blow up a Hungarian monument

“That now can’t master the children for 11 years, relatively little chance that at the primary level and 4 classes they will master the state language at this level so we can learn math, chemistry, physics and digest this material,” said the Director of the Hungarian speaking school in the village of Velyka Dobron, Joseph Kantur.

The teacher showed the plans for the teaching of Ukrainian, approved by the Ministry of education. In primary classes – 2 hours per week. Since the fifth grade, under the new law, children must know Ukrainian well enough to learn math, chemistry, physics. There is a great risk that the students surely will improve their knowledge of Ukrainian, but will significantly degrade performance in other subjects. And then understand the reaction of our neighbors. Joseph Kantur convinced that it is necessary to increase the number of hours of Ukrainian, to develop manuals, dictionaries, and most importantly – to prepare teachers who know their subject, and the Hungarian and Ukrainian languages. At the same time agree to move to the village.

But on the other hand, Ukraine’s position is strong. Minorities who live compactly along the borders, don’t know the language of the country in which you live. This also have something to do.

“You saw for yourself that in fact 25 years on the desire of the local Hungarians to really learn the Ukrainian language so that they could study her, the Ministry did not react. No textbooks, no dictionaries. We see the attitude. Here is a lot of talk, but nothing has been done to the Hungarians studied the Ukrainian language”, – said Istvan Gresa.

According to officials, 25 years the Hungarians of Transcarpathia are trying to convey to the Ministry of education to those changed attitudes and developed the modern method of studying of the Ukrainian language by the Hungarians. However, they are not heard. “We support the desire of your government that the Hungarians of Transcarpathia studied as best as possible the Ukrainian language. I understand that there is in fact nation-building, state-building. We will support, but you may not choosing the European way to act so radically, solving this issue”, – said Grega.

Yet will last for a transitional period in education, Ukraine needs to do something not to make, and be of interest to Hungarians, Romanians and other minorities to learn Ukrainian.