Village In the Luhansk region between the two worlds wars. Residents of Novoaleksandrovka to ask in Ukraine 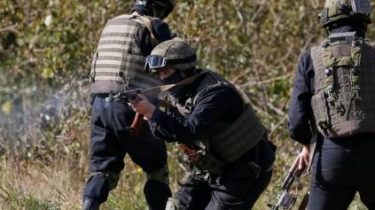 The Ukrainian military is trying to return to Ukraine the hearts of its countrymen in the Donbass. In the village of novooleksandrivka, in the grey area, the militants are walking as at home. However, the locals, although scared of the enemy, whisper asking our military to take the village back under control.

In this area, on the one hand the position of the Ukrainian mining and assault battalion, and with another – the rebels rallied under the red Soviet flag. Among them – Ukrainian village, which the enemy was accustomed to call his own, where dozens of residents of residents lost between two worlds wars.

The commander of the 108-th Separate mountain-assault battalion with the call sign “Pole” told the correspondent of TSN.Week Andrei Tsaplienko that local people go to buy or Ukrainian territory, the occupied.

In Novooleksandrivka militants set stretching and almost free to move around the village. In the grey area space if iskrivlennoi. I feel that it is the Ukrainian land and even the state flag remained flying on the edge of the village. However, the village is located in the neutral zone between the two civilizations, because it is decided by policy for many miles from Novoaleksandrovka. This means that fighters can expect in any home.

“If we meet in such a situation, trying to disperse peacefully. This is a standard situation in scouts. If you start a gunfight, it is not beneficial to anyone, when each other will cover. Run away, and may peace be affected,” – said “Pole”.

Among the local population is Pro-Ukrainian. Ivan Shevchenko on the side of the invaders does not go. The man categorically refuses to help. But, treats the scouts honey.

It was a little scary to try. Just remember the story almost three years ago, when the Ukrainian block-post brought a jar of honey with explosives inside. And in Novooleksandrivka to our guys, quite a different attitude – they are welcome here.

Ukrainian military claim that the local first await the end of the war, and then after you restore the infrastructure of Ukraine’s integration.

In Novooleksandrivka there are those who look at Ukrainian soldiers through the scope. In particular, men in civilian clothes arrive on bicycles and change those who were at the checkpoint terrorists. Near Novoaleksandrovka soldiers found a cache of Russian weapons and uniform. They learned that at least one of Novoaleksandrovsk fighting in the so-called police “LC”. It so happened that the bullets of the militants caught a local pensioner. For the sake of the father of action went not to the son, and to the Ukrainian military medics. How wounded the father of the gunman, the bullet whizzing less “gray zone”.

Now over Novoaleksandrovka quiet and the Ukrainian flag.