“Delicate issue,” erdoğan left to answer regarding the anti-Russian sanctions 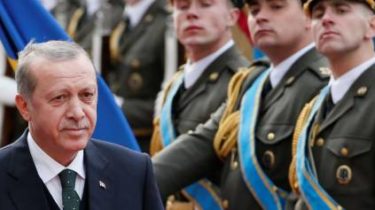 Turkish President Recep Tayyip Erdogan left the answer to the question regarding sanctions against Russia.

According to UNIAN, at a joint press conference with President of Ukraine Petro Poroshenko Erdogan was asked whether his country to impose sanctions against Russia, given the statements of support for the territorial integrity of Ukraine.

“I noted in previous press conferences told how delicate the issue of Crimea. We are now trying to take any action against our brothers of the Crimean Tatars, who are in prison and I think over time we will get the result of these efforts,” said Erdogan.

The persecution of Ukrainians in Crimea and cooperation in the defense sphere. What Poroshenko said and Erdogan

The Turkish President added that monitoring this situation, and recalled that his country’s position in relation to the Crimea “and in General in these matters,” at both the national and international levels, are known.

“We will not see our brothers separate from us, and we don’t see them like that in the future,” Erdogan said.