The broken pieces and painted faces: vandals desecrate the newest sculptures of the capital 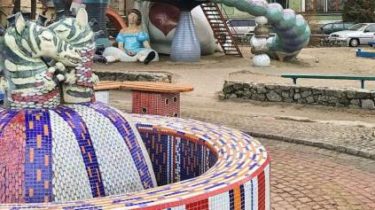 Vandals vs sculptures that make the town nicer. Grandmother in parks, fairy-tale characters Pataki, dancers , hedgehog from a fog – these works of Moscow artists have long been the visiting card of Kiev. But regularly lose their parts, and recover by the authors themselves. Those who don’t already ask pray: to have respect for their work.

“Grandma” is a classic in Shevchenko Park. Before with a bag in his hands. Today – with the hole.

“Vandal came and tore off her grandmother’s reticule is a terrible thing, he robbed her. Not only that, on the streets robbing, and even sculpture Rob, At grandma’s, the hole, winter is coming, she is cold,” jokes the author of the sculpture.

The bag broke three weeks ago. Its restoration takes all day. Anna is upset is once again breaking work, there was no time, he broke off a piece of the leg is attached to the grandmother to the bench. Think – to blame the football fans. Grandma did all the joy.

Grandma’s friend from Shevchenko Park at rusanovskaya embankment. Tear from her piece is not so easy. Because of the metal, it says Anna. Says that but she bathed the face paint. On the body are seen. With the same on their own two years fighting on the sculpture of Samson in Podil. They write on the walls, the artist’s sketching. Restores and the sculpture. Him and his nose break, and paint.

Stolen knot hedgehog in the fog, to the Welt – a monument to Panikovsky is without metal paticca. Where sculpture is more – more harm. To teach people love and respect for the city and street sculptures so far not very successful. Most art suffers in the Metropolitan Landscape Alley.

For the fifth time welds the arm to the Little Prince his Creator. Around repulsed tiles, broken the legs of the zebras separated the angels from the pyramids of pillows. The new pre-rolled tubes. Kostya says he wants to treat regular injuries philosophically. Is not always possible.

“Stole a girl we have installed two weeks ago, just pulled her out of there. Annoyed periodically by itself, but what to do,” says Kostya.

The fact that my grandmother now with a new bag like the people of Kiev. Vandals one and all condemn. And ask sculptors to do more beauty in the city. Those, in turn, I beg you to spare the sculptures and their work. Then it will be time for a new job.