Poroshenko enacted NSDC decision on the Rate of the Supreme commander 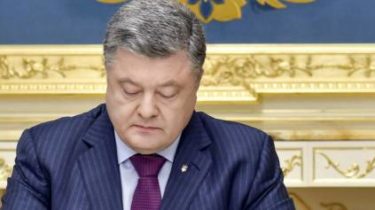 The President of Ukraine Petro Poroshenko by his own decree enacted the decision of national security Council and defense of Ukraine of 13 September 2017 “On the Rate of the Supreme commander“.

The corresponding decision of the NSDC – only “for official use”.

The position on the Rate of the Supreme commander (attached, top secret).

The decree comes into force from the date of its publication.

We will remind that earlier the President of Ukraine Petro Poroshenko has dismissed Paul Paszkowski from the post of Deputy Chairman of service of external intelligence of Ukraine.

“The release of Pashkovskiy, Pavel Nikolaevich from the post of Deputy Chairman of the foreign intelligence Service of Ukraine”, – reads the decree .

Paszkowski was appointed to this position on 20 March 2014 by the decree, at a time.. President of Ukraine Oleksandr Turchynov.