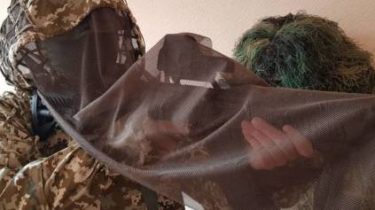 A few sniper teams appeared on the party of fighters in the Azov region of Donbass. They suddenly hit the Ukrainian military and aims at officers, according to a story TSN.19:30.

Eyewitnesses tell about the unexpected shots are bullets that pierce the bags and light fortifications, through which the soldiers may not feel safe on their own positions. In one case, the bullet was stopped by the helmet, so it does not become deadly.

Shoot mostly in the area from Pavlopolya to Water. “They say, came a group of 15 snipers. For officers,” says one of the participants of the ATO. The Russians purposefully prey on Ukrainian officers, and some even threatened through the airwaves. The military said about penmanship: first, usually shoots an enemy machine gun, and in the pauses sniper of insurgents.

And camera OSCE, nothing is fixed, convince the military. “I served in the Marines in the Water – we also the camera did not record their attacks, and here also fixed. The camera starts to record when we start from small arms to answer,” – says the fighter with the Callsign “IRBIS”.