The history of parliamentary brawls in the Verkhovna Rada has reached 20 years: voters are tired 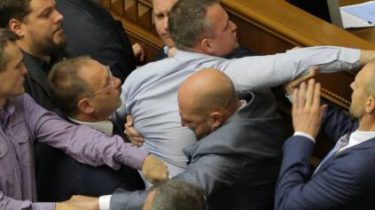 A fight in the Ukrainian Parliament have become so common that alarmed even the State security service. After the last smoke bombs in the session hall during the voting of the laws on Donbass GSO offers to conduct inspections of the MPs who are in Parliament, says the story TSN.19:30.

However, even if you take away checkers, fists MPs still remain, and the tradition is their use of very ancient and rich in examples. History of battering in the walls of the Parliament began with fights representative of the progressive socialists Vladimir Marchenko with national-Democrat Pavel Movchan. The rostrum has hinted at a possible intimate relationship Marchenko with the leader of PSPU Natalia Vitrenko, for which he received the nuts. Joined in beating myself Vitrenko – kicked’re down to the Deputy and said, “the remnants of Petlyura!”.

Videocollage instead of words: TSN sought out the first fighters in the history of modern Parliament

After 20 years Vitrenko recognized as a parliamentary battles are not followed, and that fight remember. The former MP believes that was szlachetna for modern fighters. “The man stood up for the dignity of women. We had very rich discussions, and now it’s all just degenerated into a fight,” she said.

Mosiychuk spat in the face of Caplin near the court: a fight broke out

The historic first fight remembers and former Deputy Yaroslav Kendzer, which was then almost the only one rushed to separate colleagues. “The same bull big – Marchenko. And Paul – pismennik, a kind of intellectual who is not capable, can’t fight,” says Kendzer. He subsequently ceased to participate in stefanina, but recorded them on video, so now has the archives of over 750 cassettes – and it’s only six convocations. The Deputy even called the chronicler parlamentskikh fighting, and the politician is sure that though his fists instead of verbal battles – it’s embarrassing, but logical. “The Verkhovna Rada is this piece, assembled from all over our society, all the qualities are there that you can fish in different parts of Ukraine. And all this is concentrated, so to speak, on that small area,” – said the former MP.

The style of fighting in Parliament can even be read past the MP said political consultant Segey Gaidai. “How the regionals were fighting – I could hear that they were the 1990s, and one of them was a real fighter on the street,” he said. Massive conflicts, according to experts, testify to their thorough preparation. One of the most violent occurred in 2010, when one of the deputies regionals fractured skull and another a broken arm. Vladimir Bondarenko had already recovered, and said that perhaps the most striking was the fight at vote for the so-called “Kharkiv agreement”. Then the opposition prepared eggs for the speaker Volodymyr Lytvyn, however, someone betrayed them and warned the head of the Council, so he came with the guards who had umbrellas.

The fight in the city Council: Klitschko invited the deputies to step into the ring

The whole world thundered an attempt to recover from the parliamentary rostrum Prime Minister Arseniy Yatsenyuk, which made the MP Barna. One of avtoritetnyh American publications even wrote that the Ukrainian Parliament confirmed his reputation nyalenda. But sometimes the shame is needed by politicians to divert everyone’s attention from the more important decisions and events.

The fighting among members are found worldwide, and it’s okay if the fight is fair. But in Ukraine, it is happening too frequently and is more reminiscent of street beatings, from which the voters are pretty tired. Experts suggest ignoring the robbers and not to comment on their actions, then the need to make them disappear by itself, because the PR component will not work.