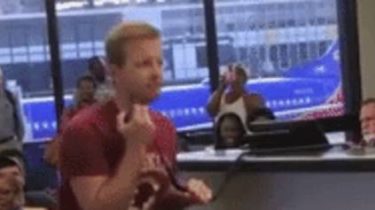 At the airport of the American city of New Orleans witty young man sang a song and danced for the passengers who were waiting for your flight.

To kill time waiting for the plane, one of the passengers just stood up and began to sing, in parallel, very funny dancing. After a few seconds he was already applauded, sang along and shouted approvingly.

Previously in the US, the girl named Mahshid of Masuji all night stuck at the international airport “Charlotte Douglas”, but decided not to waste time and have a little fun. She danced along with the staff, and video recorded on the camera.