“Marina, you’re the best cook”. Poroshenko on the camera I enjoyed the soup of C’s military 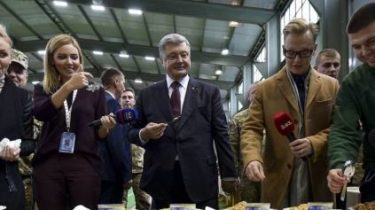 The President of Ukraine Petro Poroshenko today, 12 October, in Kiev together with representatives of mass-media tried new diet for the Ukrainian military.

Before guarantor and journalists prepared a variety of dishes, which will now have Ukrainian soldiers. Among them was a soup of C’s. First tried it Poroshenko.

“Start with the soup. Given that it’s from the C’s – the taste of soup,” – he said, eating a spoonful.

In response, the reporter said that the wife the guarantor, the soup apparently still delicious.

“Marina, do you hear? You’re the best cook,” – said Poroshenko.

According to him, no army in the world today did not use the first meals dry rations for the military – Ukraine became the first.

Earlier it was reported that in zone ATO in Eastern Ukraine will be sent to the party’s new dry daily dietmade according to international standards. It includes first and second courses of many kinds, which can be heated without the use of fire.