Matios called changes in the code of criminal procedure, “criminal” and urged not to sign them 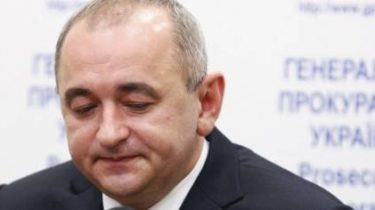 Bill No. 6232 on amendments to some codes, which launches judicial reform and was voted by the Parliament, cannot be signed.

This was stated on his page in Facebook the chief military Prosecutor Anatoly Matios.

“Changes in the criminal procedure code that will destroy the consequence of law enforcement bodies and restrict the rights of citizens should not be signed! Do not leave hope that the Chairman of the Verkhovna Rada of Ukraine, Parubiy come to their senses and will come up with “know-how” in part “implementation of editorial and technical legal refinement”, and in fact rewriting certain provisions of the Law,” he said.

According to Matios, if changes in the criminal procedure code did sign, it would be a crime”.

In addition, the head of the Military Prosecutor’s office of Ukraine said that already appealed to all the heads of law enforcement agencies and the presidents of law schools and the Academy of legal Sciences to support his position.

Recall, 3 October, the Rada approved a bill that will launch the judicial reform and provides for changes in several codes, as well as innovations that has caused a stormy debate. Some MPs in the hall were outraged by the law and stated that it is contrary to the Constitution. For a long time in the hall were heard cries of “Shame!” and just before the vote, MPs complained Paruby on “knopkodavstvo” during consideration of amendments to the document.

In turn, the head of the Department of special investigations of the Prosecutor General of Ukraine Serhiy Gorbatyuk assured that changes to the criminal procedure Code, which Parliament passed on October 3, in the case of entry into force will lead to the closure of all criminal proceedings concerning all crimes committed during the Maidan, which is now being investigated.

“The Verkhovna Rada adopted amendments to the criminal procedure Code. In particular, taken into account and amendments of the people’s Deputy Andrey Lozovoy. According to these changes, all the production that we are investigating in the crimes against the Maidan, after the law came into effect will have to be closed. The amendment he determines that the investigator will have six months to investigate the total period and for a further six months time may extend the court. All. Other options for the extension is not available” – he said.