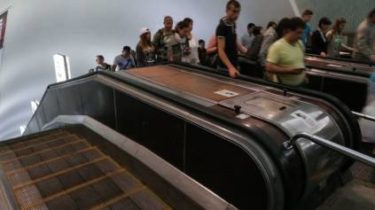 Yesterday, October 11, at the metro station “Khreschatyk” broken escalator due to the thin women’s heels.

A foreign object got into design experts fixed the problem for almost an hour.

Passengers could climb on the escalator only to Institutskaya street or Gorodetsky, because the reserve escalator is on overhaul.

Since the beginning, in the subway happened 11 stops of escalators with damage to the equipment due to the ingress of foreign objects. 2051 another case for the same reason, without breakdowns. In just 9 months fixed 5280 stops escalators.

We will remind, in July in Kiev on the red line metro train broke down, causing passengers were forced to disembark.