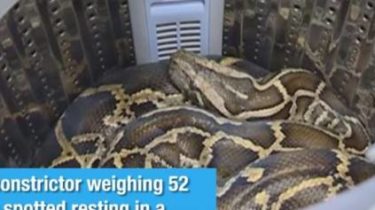 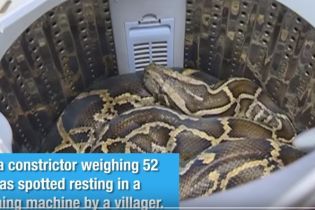 In the Chinese province of Guangdong woman found in his washing machine 52-kilogram boa constrictor.

This was reported by “People’s Daily, China”.

Suddenly the woman heard a noise inside the device and when I opened them, I saw a sleeping snake.

Representatives of the center for rescue and rehabilitation of wild animals later took the animal. After weighing it turned out that his weight is 52 kg.

The boa constrictor is a nonpoisonous snake. In China this species is protected by law.

Foot snake crawled near the Playground in Lviv

Earlier it was reported that in one of the parks in Khmelnitsky passers-by he saw a snake crawling on the bench. The animal had a length of not less than eighty centimeters; it hissed and was not going to crawl away. Passers-by speculated on where this reptile crawled.

Videorola snake in one of the parks in Khmelnitsky frightened locals