Romania is ready to dialogue on controversial educational law – Klimkin 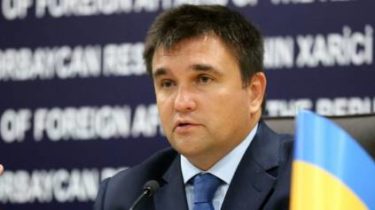 The head of the Ukrainian foreign Ministry stressed that in Romania, the conversation was not as in Hungary.

“There is a willingness to open dialogue. But it is necessary to regularly work with the local community”, – he stressed.

Also Klimkin said that the new law of Ukraine does not deprive minorities of the right to education.

“The law is about people first, not politics. Grateful for his constructive approach and support of the Romanian side,” he said, promising to consider all recommendations of the Venice Commission, after an opinion regarding the law. Quoted Klimkin, the press Secretary of the foreign Ministry Marian Betz.

“We also will consider the recommendations of the consultations with the Romanian community in the development of the implementation mechanism of the law,” the Minister added.

According to Klimkin, the meaning of the law is to combine the study of the Romanian and other languages of national minorities with learning Ukrainian.

Recall, September 5 during a meeting of the Rada adopted the law of Ukraine “On education”, which introduced the 12-year secondary education. The language of instruction in educational institutions determined by the state. The document envisages that the institutions can give one or more courses in two or more languages – Kazakh, English and other official languages of the European Union. Persons who belong to indigenous peoples and national minorities of Ukraine is guaranteed the right of education in native language along with the Ukrainian language in public institutions of preschool and General secondary education.

Romania and Hungary, criticized the adopted law on education, believing that it violates the rights of national minorities in Ukraine. Statements with respect to Ukrainian law by the Ministry of foreign Affairs of the two countries. The President of Moldova Igor Dodon hopes that Ukraine will reject the new education act because of the violation of the rights of national minorities. According to him, the new education Act will lead to the abolition of the system of education in the native language of the ethno-cultural minorities in Ukraine. Subsequently, in Russia, this law called “an act of forced Ukrainianization, which constituted a flagrant violation of Ukraine ratified the European Charter for regional or minority languages”. “The state Duma has prepared a statement regarding the Ukrainian law on education, in which he condemned adoption by the Verkhovna Rada of the document. The Russian foreign Ministry stressed that the document affects the interests of millions of Russian-speaking residents of Ukraine.

In turn, the experts of the Council of Europe has positively evaluated the law on education in Ukraine. On 28 September the Minister of foreign Affairs of Ukraine Pavlo Klimkin sent the education act for consideration of the Venice Commission.