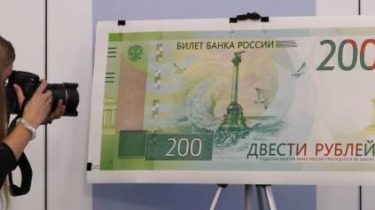 NBU forbade banks of Ukraine to perform operations with Russian notes and coins with the image of the objects located on the occupied territory of Ukraine.

About it reports a press-service of the NBU.

In Britain the geography of Crimea to finish Russia

“The national Bank of Ukraine has banned banks (their branches, offices) and financial institutions to carry out cash, including foreign exchange, operations with banknotes (Bank cards) and coins the Central Bank of the Russian Federation with the image maps, symbols, buildings, monuments, monuments of archeology, architecture, history, landscapes, and any other objects located on the occupied Russian Federation, administrative-territorial units of Ukraine, and/or which contain texts relating to the occupation of the Russian Federation, administrative-territorial units of Ukraine”, – stated in the message.

It is noted that the ban also applies to transactions conducted during the purchase/sale of foreign currency between banks.

In addition, financial institutions and PJSC “Ukrposhta” is prohibited in the implementation of payment to accept or give cash foreign currency – banknotes and coins-the Central Bank of the Russian Federation with images or texts that relate to the occupation of the territory of Ukraine by Russia.

According to the NBU, the decision shall enter into force on 17 October 2017.

Recall, the new banknote denomination of 200 rubles with the image of the occupied Sevastopol was presented on 12 October by the Bank of Russia. The presentation took place with the participation of the Chairman of Bank of Russia Elvira Nabiullina. On the bill green placed the symbols of the occupied Sevastopol. The obverse depicts the monument to the scuttled ships, and on the back of Tauric Chersonesos.