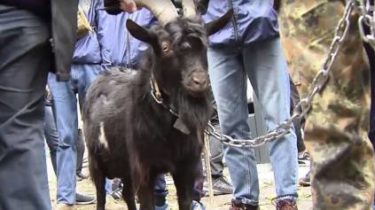 Ukrainian activists resulted in the Embassy of the Czech Republic black goat and tied the animal to the fence. Such was their reaction to the scandalous statement of the Czech President Milos Zeman against the Crimea, according to a story TSN.19:30.

“It is, in fact, we give friendly advice to the Czech people to get rid of the goats in your leadership, who can quarrel with all Europe and civilized countries,” – explained the intent of the organizers. The protesters began putting up posters with the face of Zeman, but the diplomats of the fence directed them to a nearby building: “We Slovakia – Czech Republic we are not!”.

Videotransit activists laughed with the President of the Czech Republic

DAC black together with activists coming to the Czech Embassy, he’s a little scared, but the rally’s organizers claim that for him everything went well and promise after the performance to send the animal to a rehabilitation center. “Took slaughterhouse, in fact, from the knife, saved his life,” they say.

The Embassy of the Czech Republic in the indignation of Ukrainians reacted with understanding. “Our Prime Minister and our Senate you know. The Embassy is part of the government”, – explained the press-Secretary David mašek.

“Zeman dependent on Moscow”: Chubarov in Prague criticized the statement of the President of the Czech Republic in the Crimea