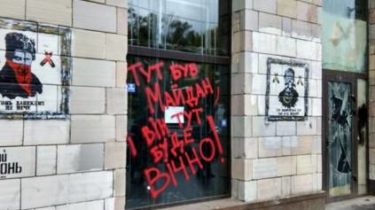 Social artist Sociopath criticized the resumption of the “Icons of Revolution” on the Grushevsky street without his participation. Sociopath called it vandalism, and organizers of the restoration of the graffiti was accused of self-promotion.

“Applied spots have nothing to do with these revolutionary characters. Hopefully, this time the unauthorized acts of Dmitry Reznichenko and companies on the role of the restorers of historical memory will not remain without attention of law enforcement agencies and their creative Netophathi will be condemned by the public, which will not allow itself to be manipulated,” wrote holodnik.

Threw eggs and fired the tires. The activists retaliated shop, who erased the graffiti on the Grushevsky street

Sociopath denied allegations that he withdrew from the restoration of graffiti. According to him, he works in the legal field.

“I work in the legal field, and as much as I wanted to restore the “Icon of the Revolution” here and now, even in 2014, I coordinated the creation of all of their work on independence with the headquarters of the Revolution. Today, I have no moral right to offset the possibility of legitimate grounds for the resumption of the “Icons of Revolution”, and if human laws are written not for everyone and not for this was the Revolution of Dignity, then why did the Heavenly Hundred killed and continues to kill our heroes in the East!?”, – he wrote.

The artist has said that ongoing investigations into the destruction of “icons of Revolution” and completed a challenging process of law permits. He appealed to “all sober-minded Ukrainian” Patriotic organizations, Prosecutor General Yury Lutsenko, interior Minister Arsen Avakov, urging them to give moral and legal assessment of the restoration of the famous graffiti without his participation. Also Sociopath asks to “finally halt the speculation around this topic”.

Yesterday’s news was the saddest in the history of the “Icons of Revolution”. Even after the “Dotsenko” and “Rabinovich” remained possible.

Also there arrived activists of the National body with a Balaclava and eggs. In addition, demolished the bus, there were a few attempts to ignite. Shop pelted with eggs.

The Kiev Prosecutor’s office opened criminal proceedings on the fact.

In 2014, the activists painted graffiti during the bloody confrontation on Grushevskogo. Taras Shevchenko, Lesya Ukrainka, Ivan Franko was introduced in Balaclava. It was considered a symbol of the struggle for freedom.