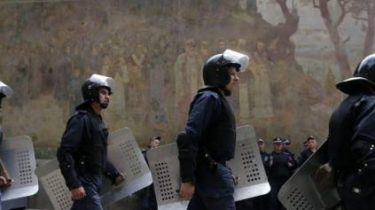 Metropolitan police conducts investigations in Museum street. They are connected with the criminal proceedings concerning the theft of military property.

According to the Department of communications of the National police of Ukraine, the number of people’s deputies together with the part of activists hinder the conduct of these investigative actions. “These individuals are defiant and have a physical resistance to the police”, – inform the police.

Police warn about inadmissibility of such actions and calls for respect for the law and the rule of law. “The mechanism to challenge the legality of actions of police officers provided by law and the use of politically heated of participants of mass actions is unacceptable,” according to police.