Under the Rada clashes between protesters and police, there are victims 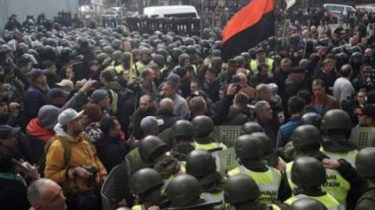 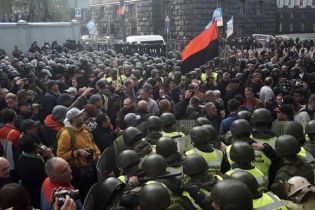 In the center of Kiev at the intersection of Hrushevsky and Garden skirmish broke out between protesters and police officers.

As noted, several young men with covered faces attacked the national guardsmen who were sent from Parliament house to the side where there is a metal frame to assist the police in blocking the passage.

At the same time, another group of people began to break down metal barriers near the part and fight the police.

As a result of clashes one of the activists was wounded in the head, also suffered a police officer. After the fight he was lying on the sidewalk and his nose was bleeding.

According to the adviser interior Minister Anton Gerashchenko, a policeman was hospitalized after care.

Published by the Anton Gerashchenko 17 Oct 2017

We will remind, earlier it was also busy in the Museum street near the office of the movement of new forces”, which is located near the site of the protest.

In the morning, non-faction people’s Deputy Vladimir Parasyuk at Parliament building staged a fight with the head of Department of State protection Valery Geletey. Between them there was a verbal altercation that escalated into a crush.

We will note, today, October 17, in Kiev representatives of different political parties protest outside the Verkhovna Rada for political reforms. The government quarter was blocked by police officers.