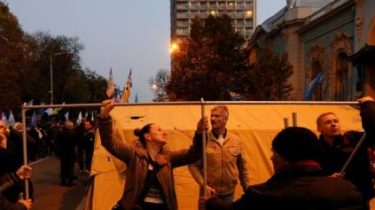 Tent camp near the Parliament expanded on the Grushevsky street and Mariinsky Park. About a dozen large tents blocked the roadway, according to a story TSN.19:30.

The situation in the center of Kiev generally calm, hundreds of law enforcement officers are close by and not preventing the actions of protesters. Now on the Grushevsky street does not stop anyone and not even check the contents of the bags, as it did in the first half of the day. The street is blocked off for pedestrians, but completely passable. But the first line erect the activists – they are afraid of a possible assault of law enforcement officers in the night.

Videoporama and buckwheat with stew: protesters ready to stay overnight in the camp

Simultaneously with the appearance of barricades delivered earlier earned a field kitchen – activists fed buckwheat with stewed meat. People continue to build temporary housing and set a new tent. MPs among those who are planning to sleep on the street, while journalists have not met.

As reported, the protesters predict that the tent city will exist from several days to weeks. “Yet will not solve all our problems” – say the protesters.