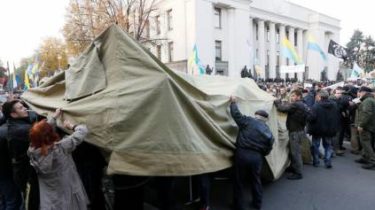 The situation around the Parliament after dark calmed down. Neither law enforcement nor the protesters to leave the center of Kiev is not going to, says the story TSN.19:30.

The protesters continue to deploy the tent – now they have about 30. Under the building of the Parliament brought up a field kitchen, but the chefs will not say whose it is, who and what are you planning to feed. “Completely empty tanks. Waiting for water,” they say.

Activists believe that the protest camp will exist from several days to weeks. “While it will not solve all our problems,” asserting their intention to remain in the tents the protesters. Grushevskogo street through political action remains impassable.

We will remind, today, on 17 October, in Kiev representatives of different political parties protest outside the Verkhovna Rada for political reforms. The government quarter was blocked by police officers.