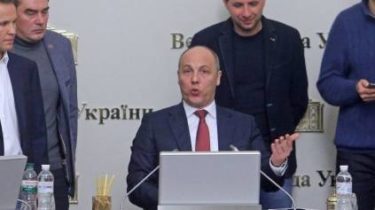 Chairman of the Verkhovna Rada Andriy Parubiy called on the organizers of the rally to unlock the entrances to Parliament and not to attack the deputies.

He said this during the opening session, UNIAN reports.

Near the Glad morning, a rally of 200 people

Parubiy said that impeding the work of Parliament and attacks on people’s deputies of Ukraine – is unacceptable.

”I now just require the event organisers to provide free entry and exit of the Verkhovna Rada of Ukraine and people’s deputies, and employees,” he said.

Paruby warned that today at 15.00 at the Parliament is scheduled to meet with the President of Malta, which you need to unlock check-in and all entrances to the Parliament.

In addition, he added that ”under such conditions it will be very hard on Thursday to collect a sufficient number of MPs to vote for medical reform, and for integrity”.

”Every MP must know that he can come to your workplace and vote… We must ensure that every Deputy of such a possibility, otherwise we put at risk our agenda,” – said paruby.